Voices From The Grave 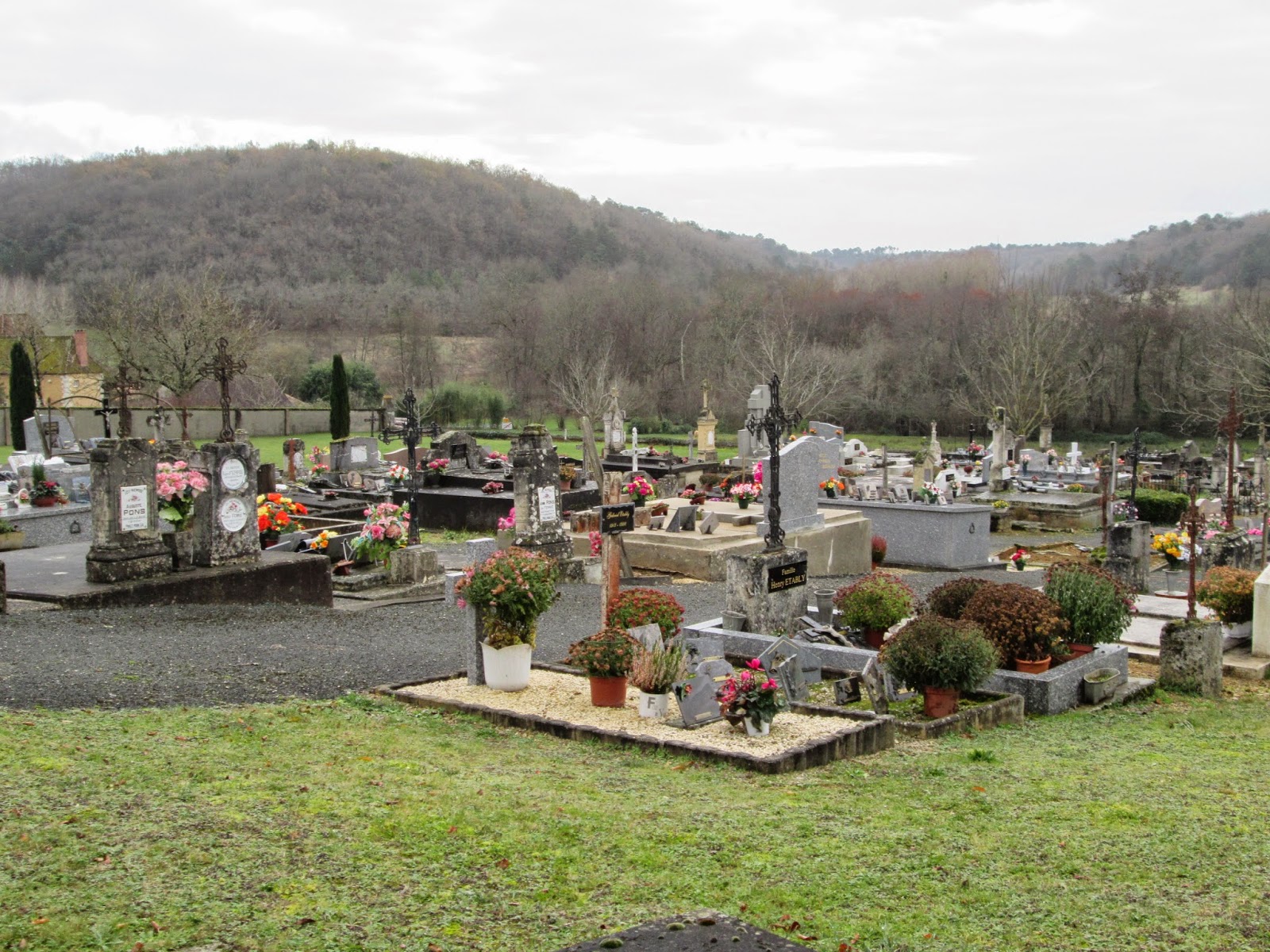 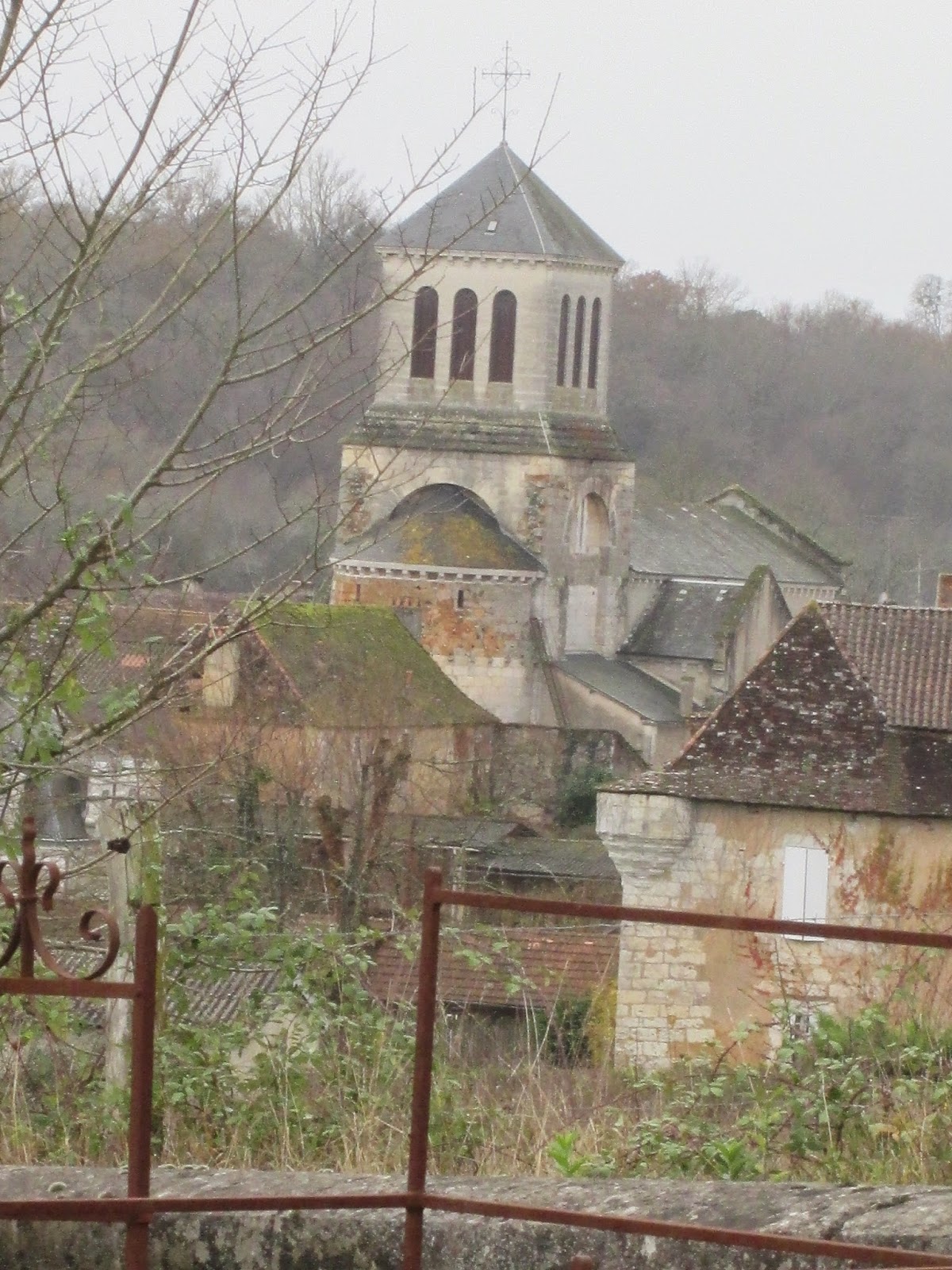 Today Jess and I visited the peaceful country graveyard in Issac which is perched on a gentle slope surveying the countryside just at the edge of the village. It is surrounded by a high gray wall with a wrought iron gate at the entrance.  How fitting that the ones who have gone before are laid to rest in a place of prominence as you head into the village........ 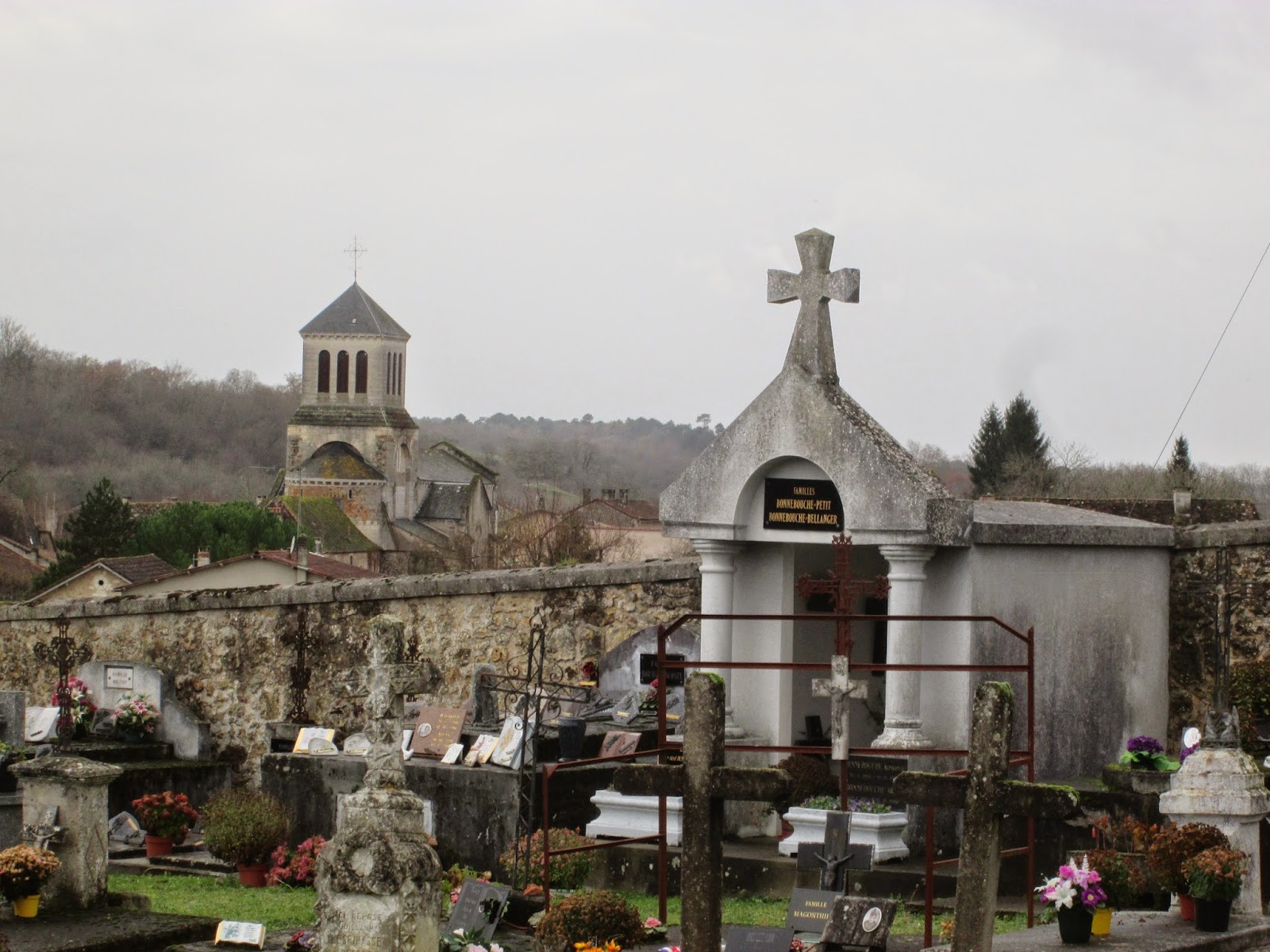 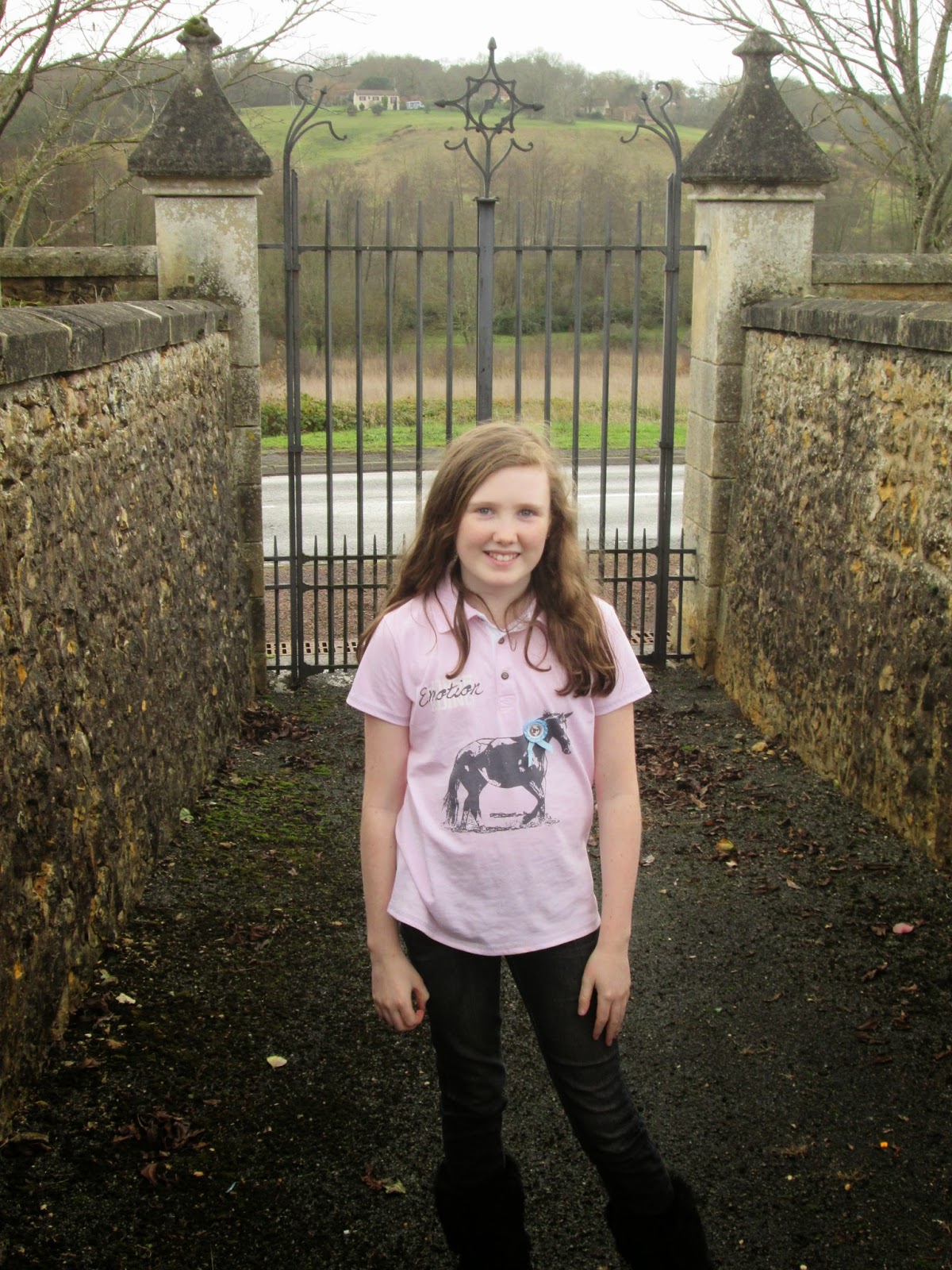 Some people might find visiting a cemetery a bit morbid.....not me (or Jess, a mini- me!)  Perhaps it is the Irish is me.... In Ireland, when one dies, it is custom to celebrate their life as it is done with an Irish wake.....to laugh, to cry, to tell stories, to relive your memories of the deceased.  The graveyard is a glimpse of the story of who lived here and died here, last year, or perhaps last century, what families populated the area, what secrets lay beneath the concrete beds?  To me, walking and stopping at each and every grave in the Issac cemetery brings those souls back to life for a moment just as it says on a plague on one of the graves; 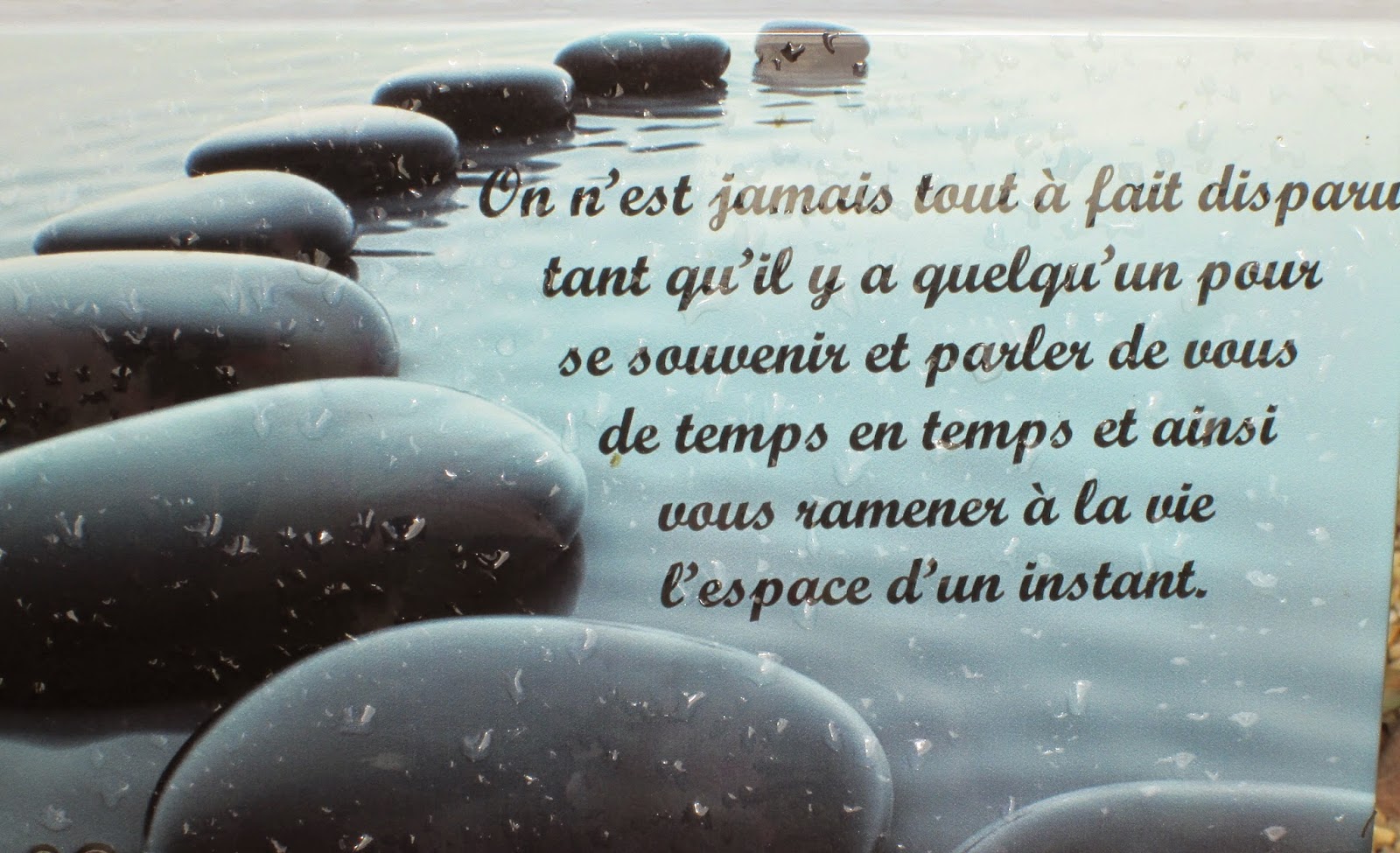 The majority of the graves are cased in concrete, and there is a mix of old and new, of tended and abandoned, of the prosperous and the paupered.  The Angel of Death shows no distinction......rich or poor, young or old..... 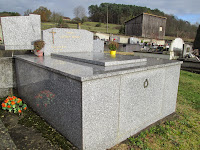 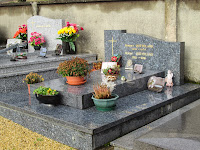 I was shocked to find that a lot of the graves only have the family name, no dates or specifics about who is actually buried there.  It was interesting to see that even with the graves spaced generously and the rows having  bigger spaces, the graveyard is half empty.  There are not that many graves altogether, but perhaps it is just how many families that are in the area and each family continues to use the same plot?  The population of Issac has decreased in recent years dropping from 472 people in 1968 to 370 in 2007 and judging from the lack of people around since I have been here, it has decreased again since 2007!!!! 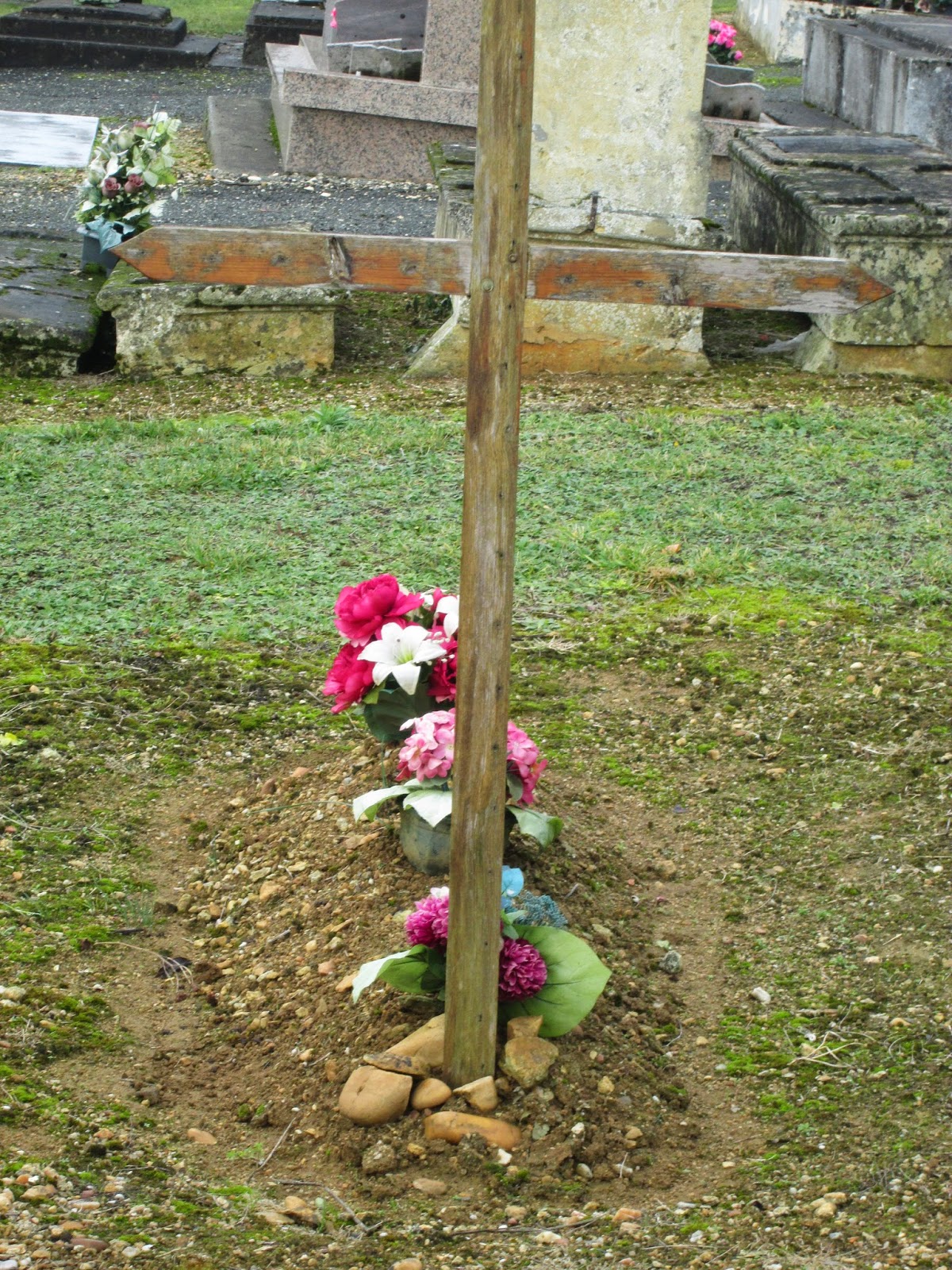 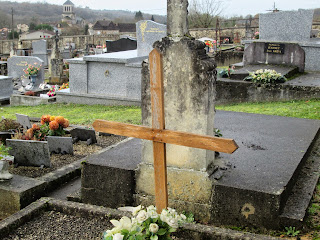 There were loads of fresh chrysanthemums and beautiful potted plants and shrubs on many graves throughout the cemetery so it is obvious that the graveyard is frequented and graves tended by family members. 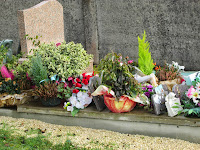 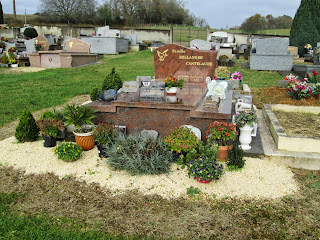 There are beautiful ceramic flowers on a lot of the graves - a great idea because they seem to be better than real flowers or artificial ones for their lasting power from the elements: 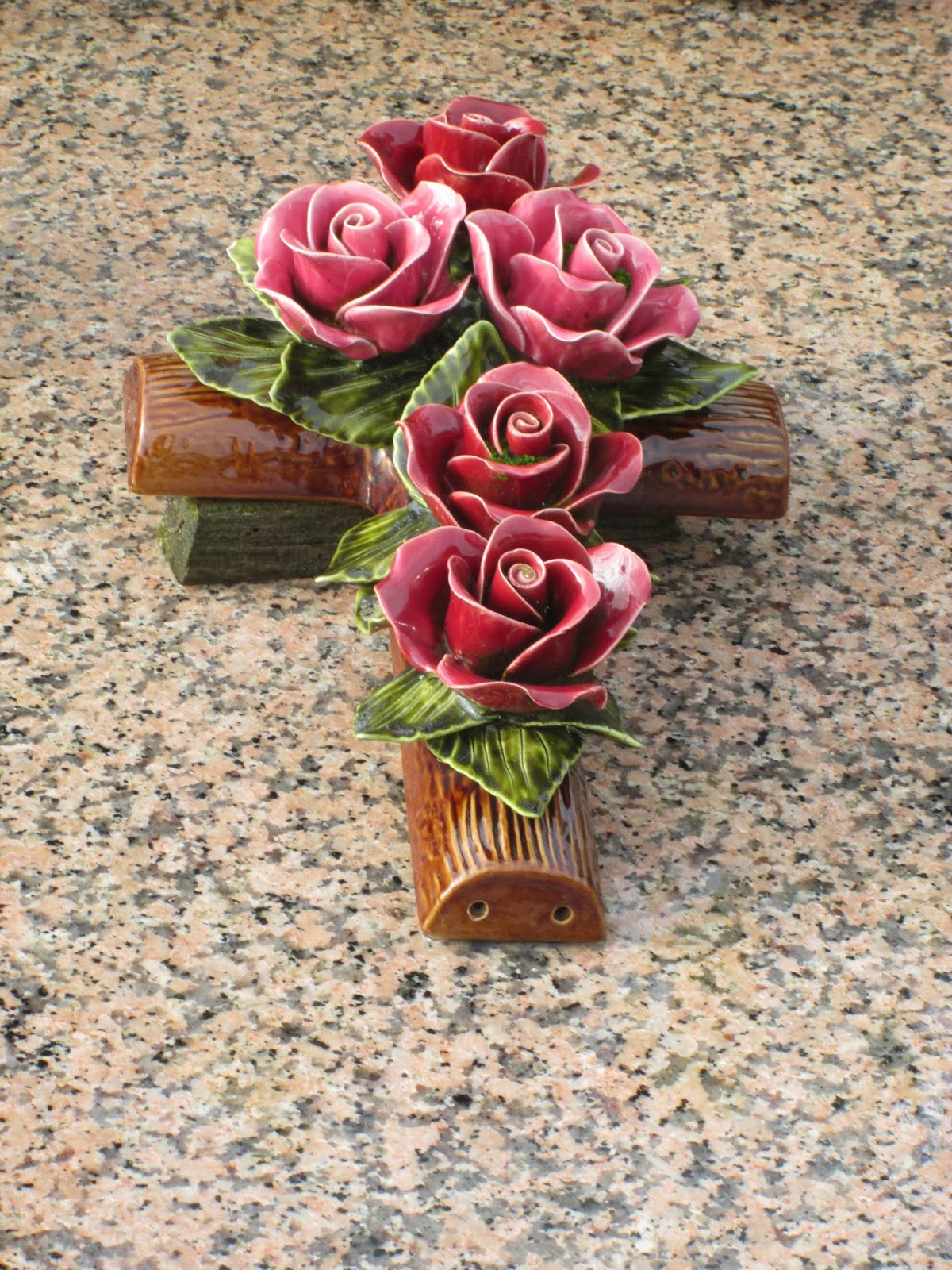 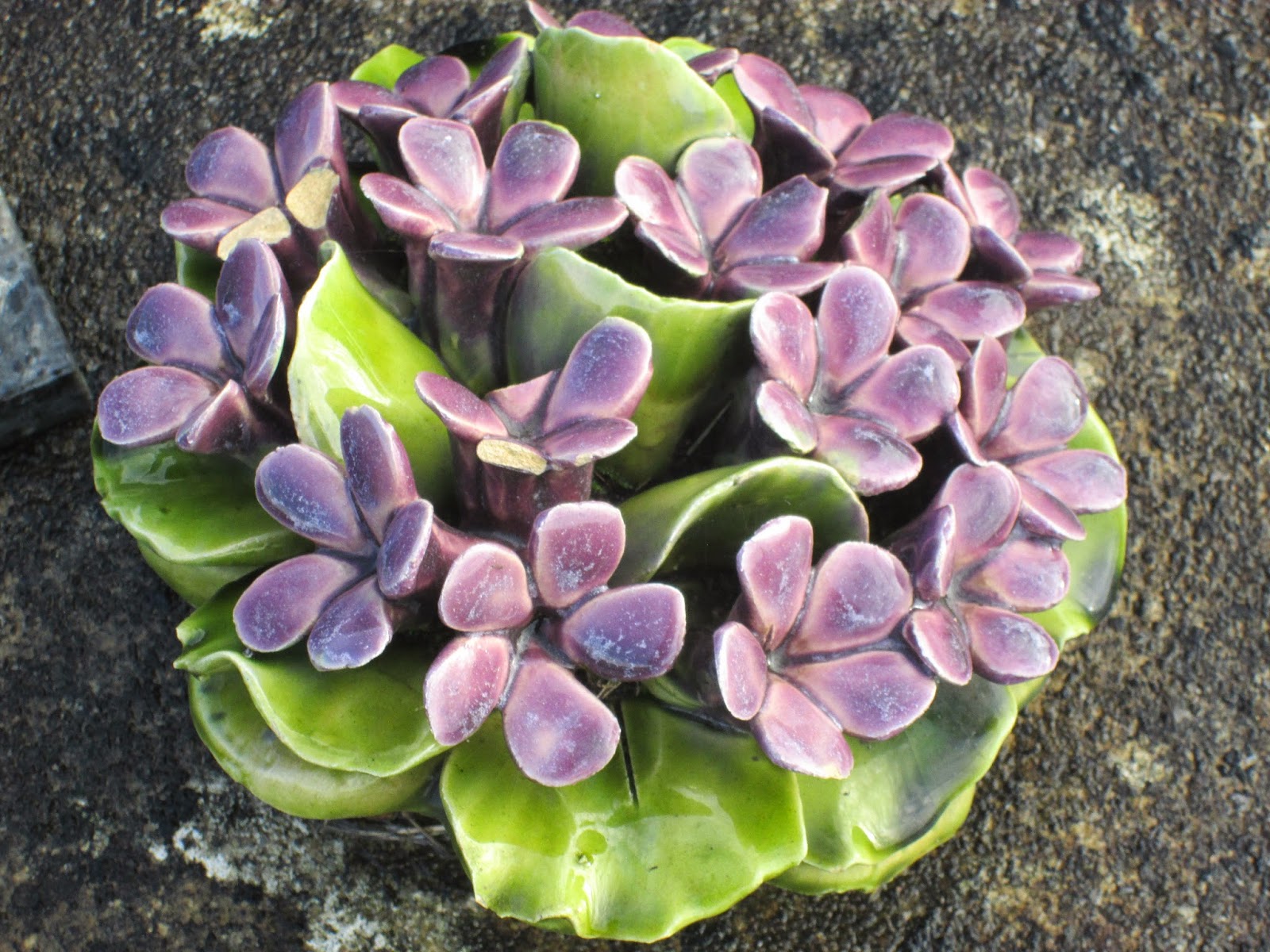 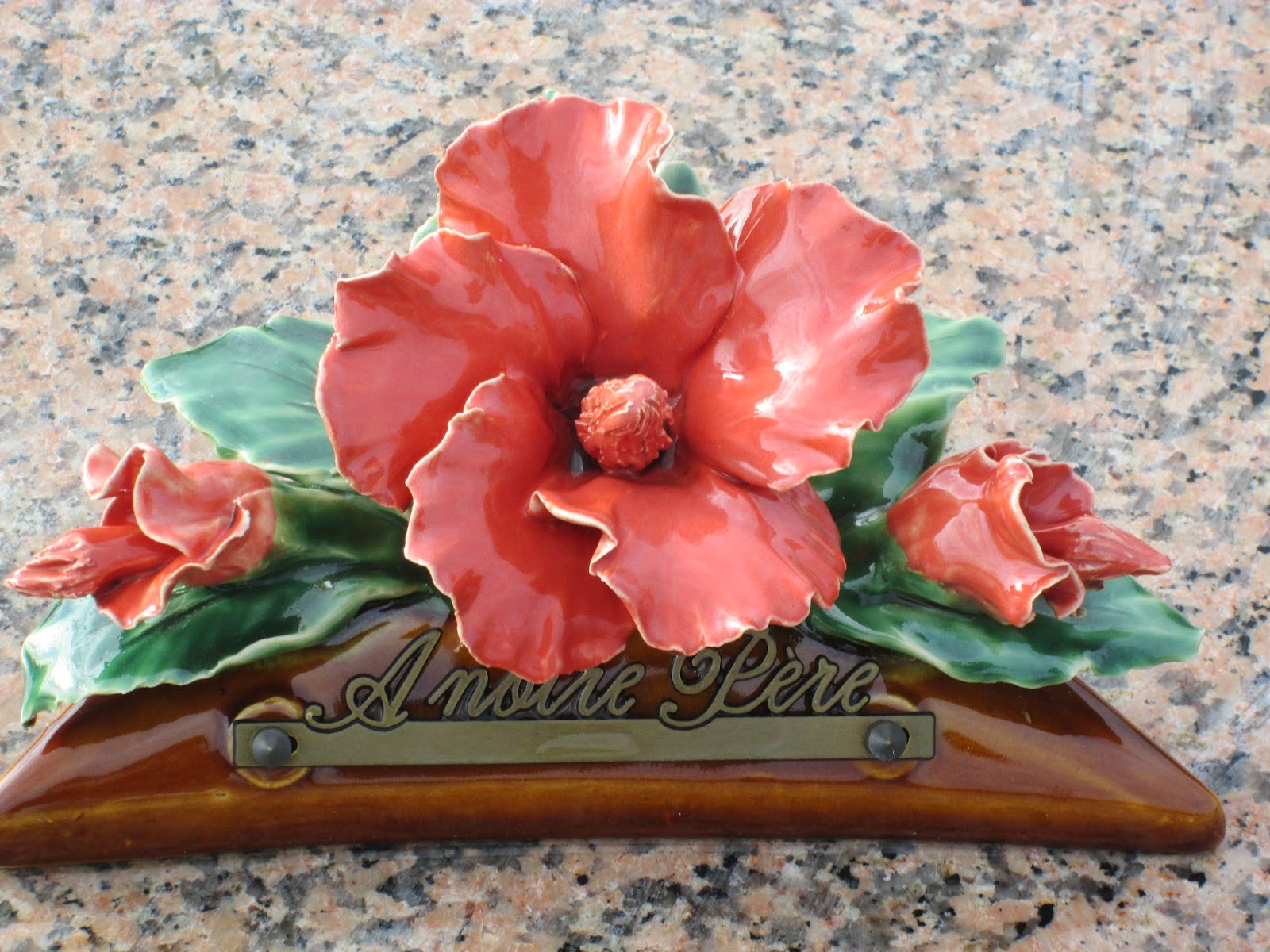 I was excited to see a  "Famille Mazieres" grave.......the name (Domaine de Mazieras) of the estate that my villa is on.....a connection to the family and its place in the locality and a history I intend to investigate further (when my French improves!!!!) 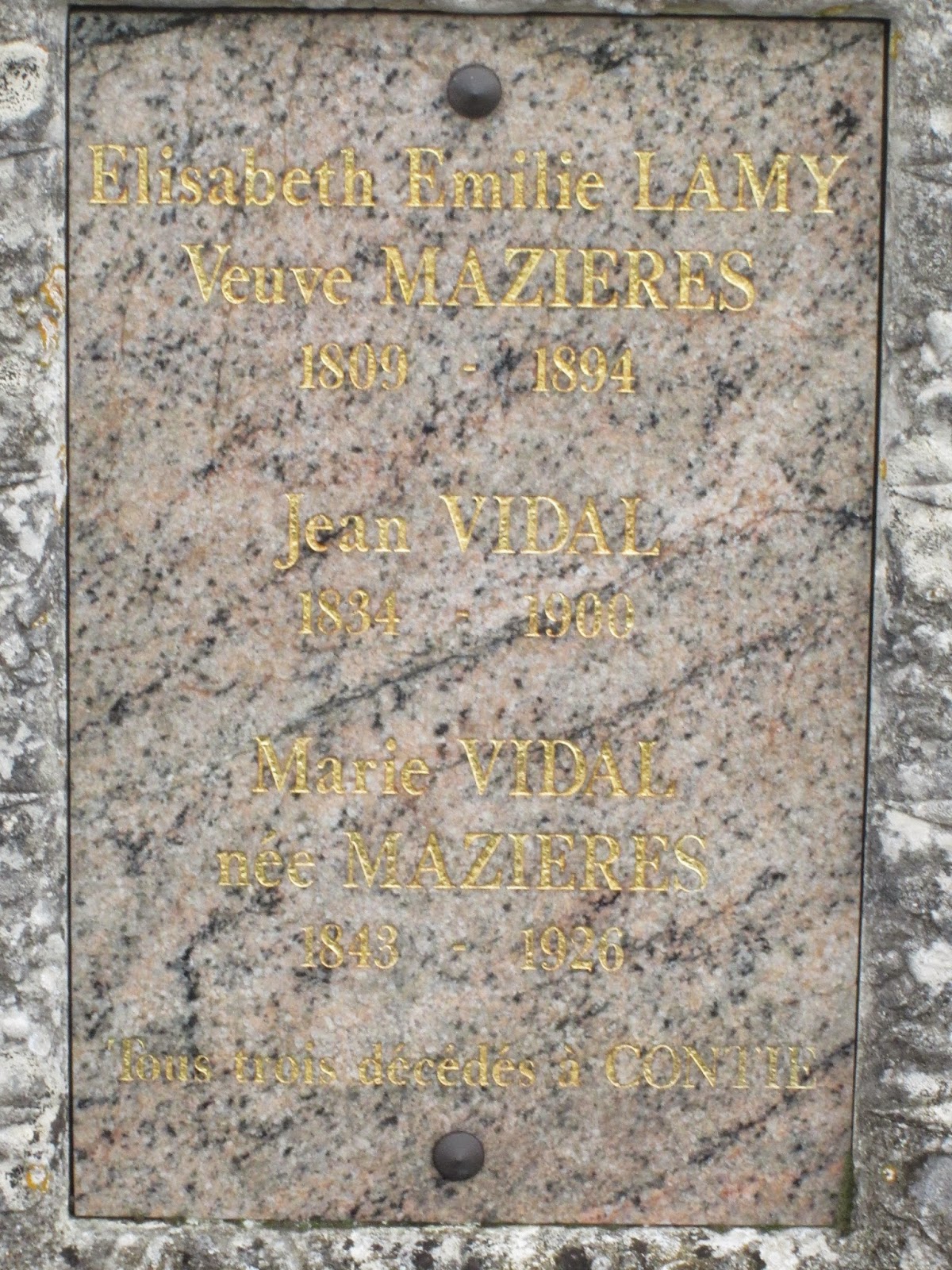 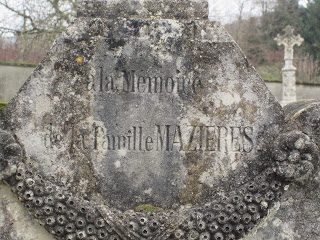 I went through the whole graveyard thinking there would be at least one Irish name in it, but no, they were all French except for a baby who died with the last name Ball which I take to be English, and it was a recent death.  I must also say that the Irish hold the award for the best crosses (especially the celtic ones, of course!!!)

It was interesting to see some trends through the years.  Sometimes pictures of people were put on the gravestones: 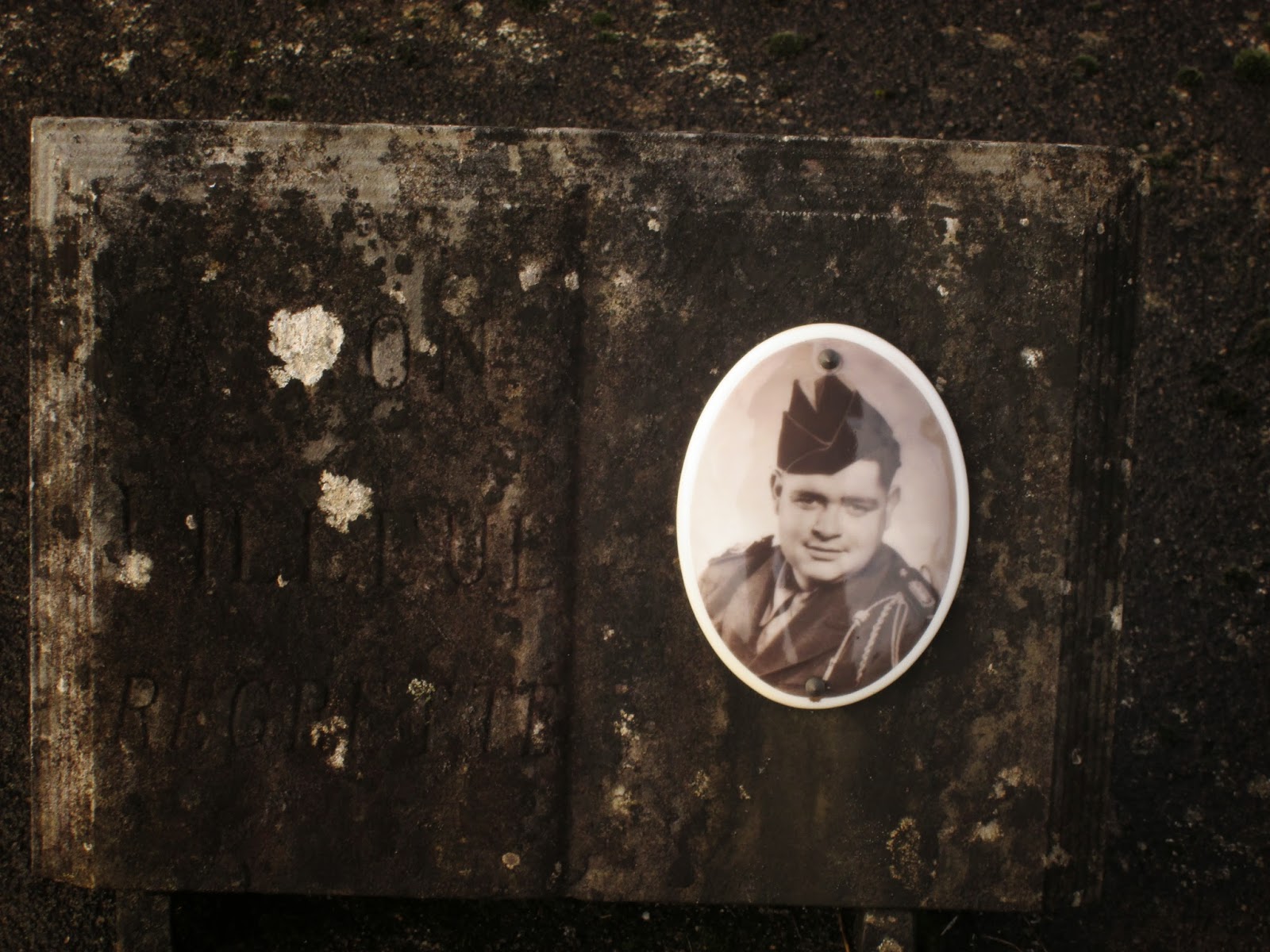 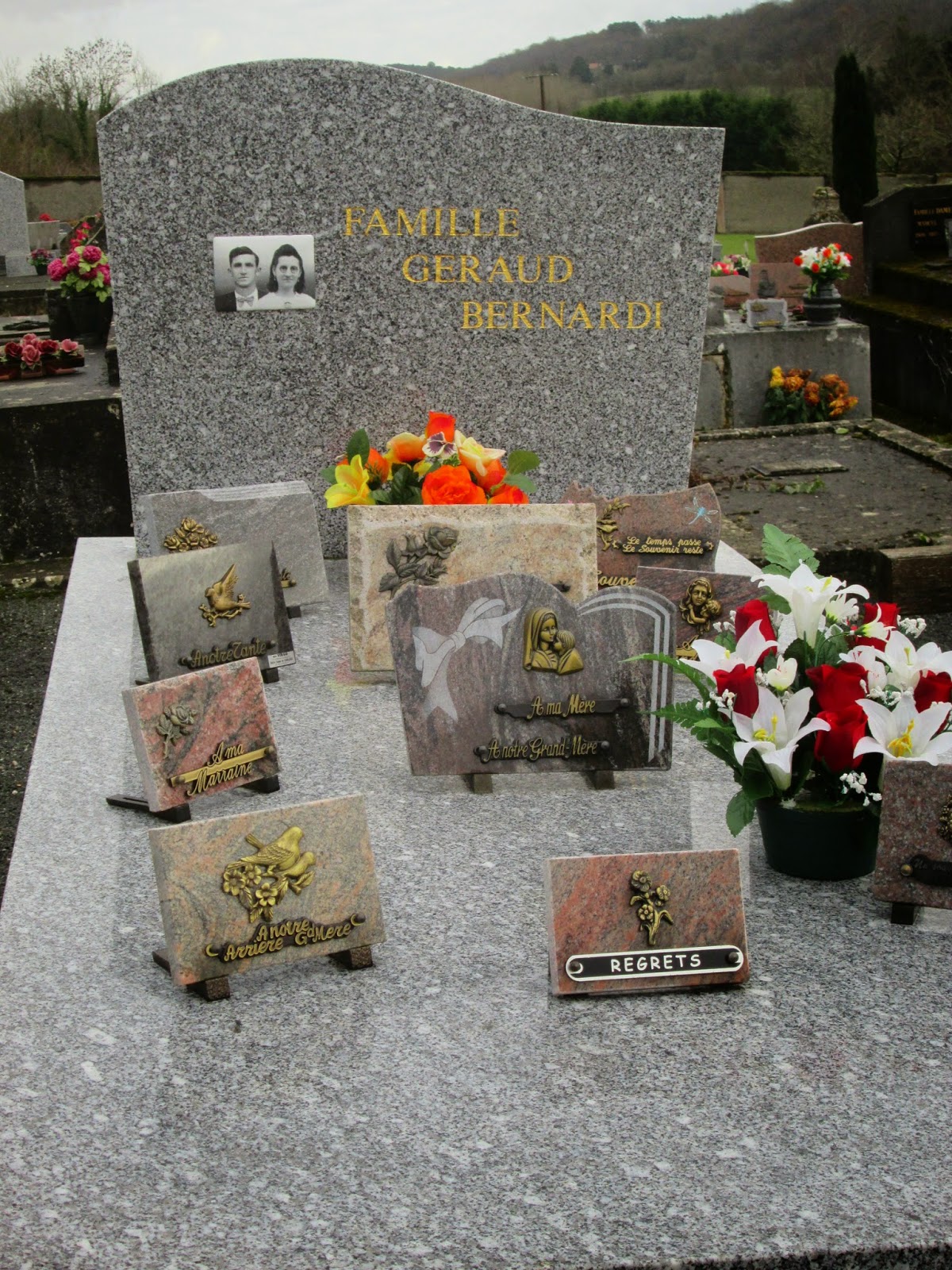 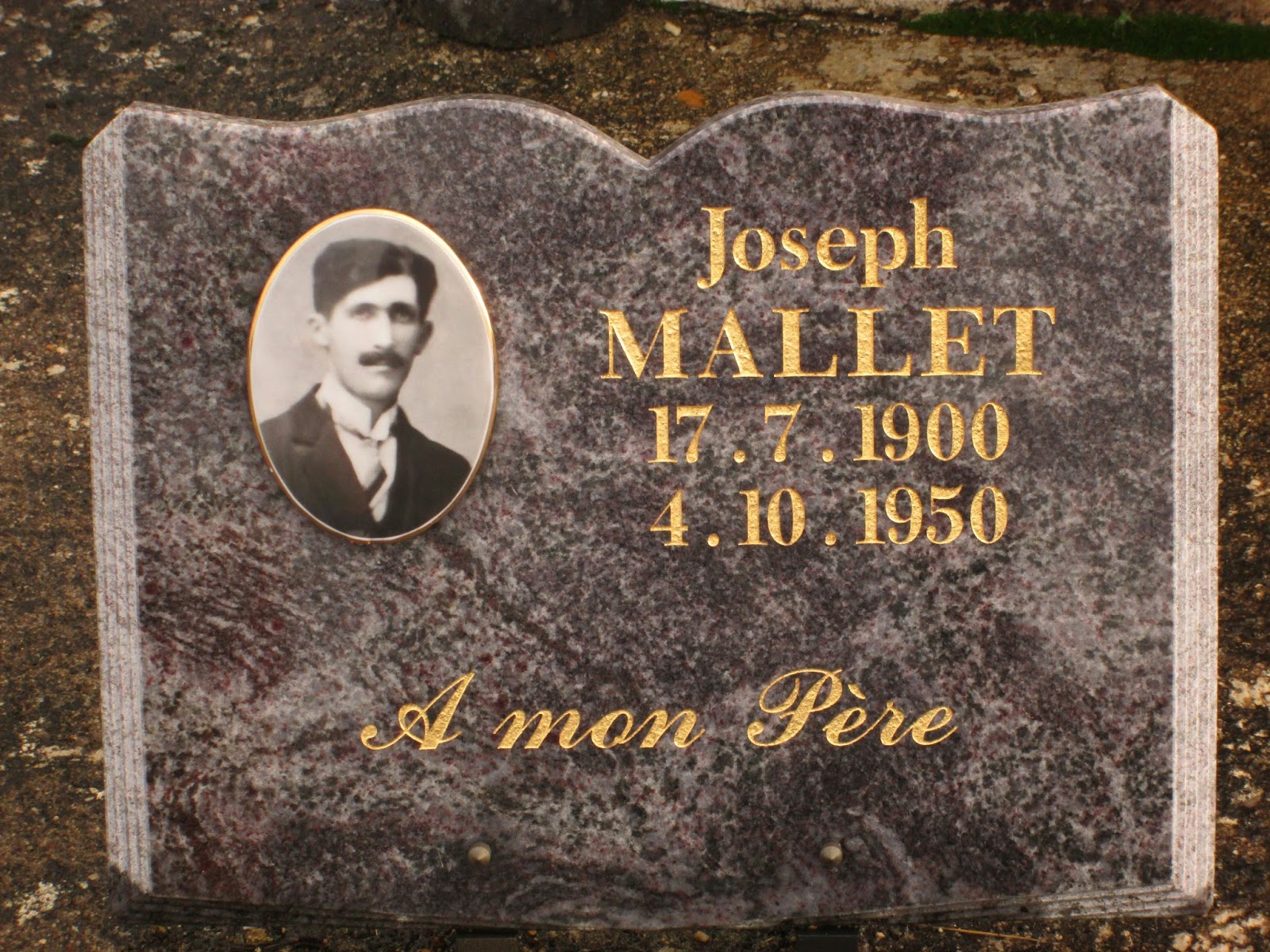 Long ago, slate (and concrete) were used to mark graves: 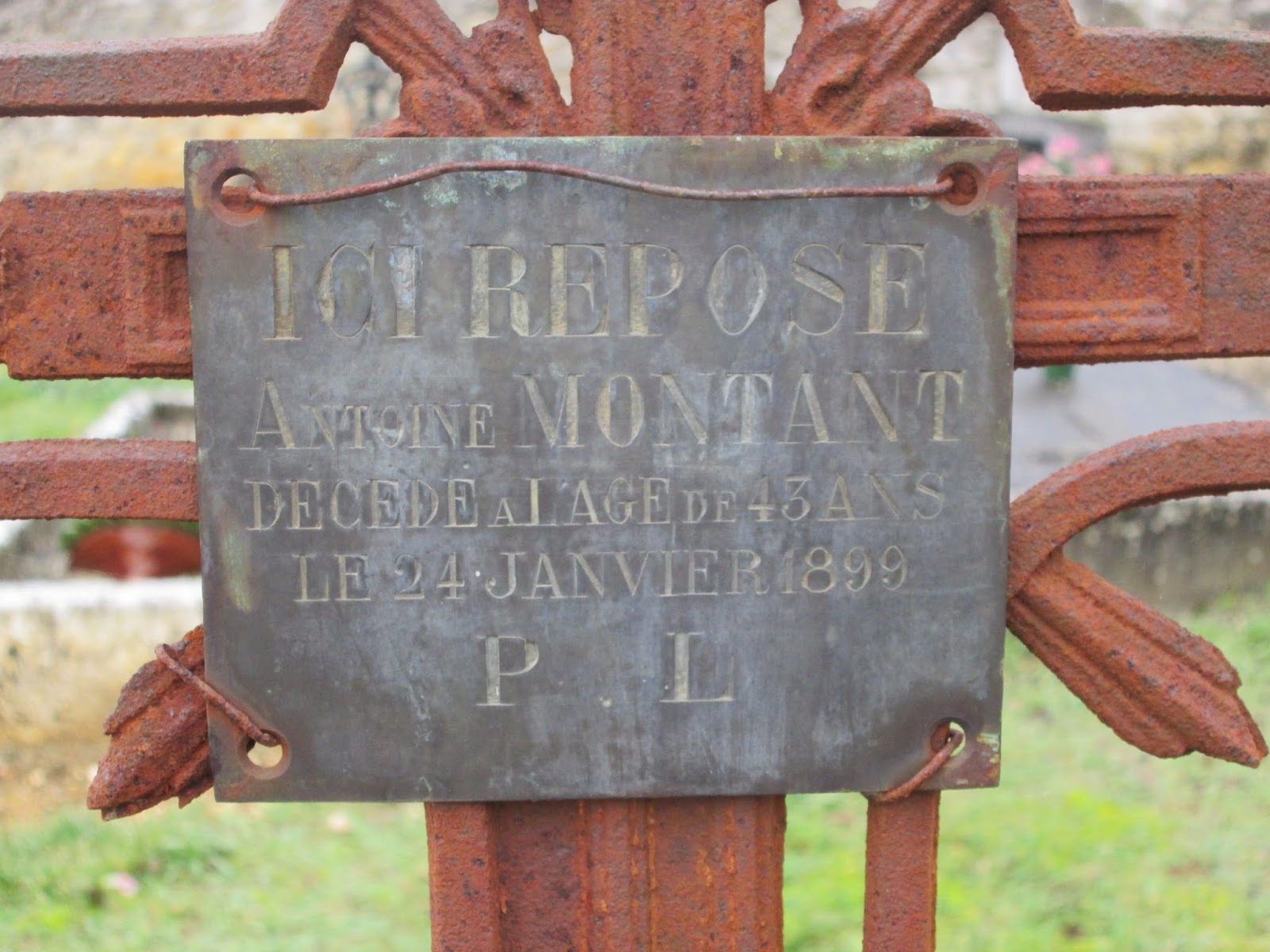 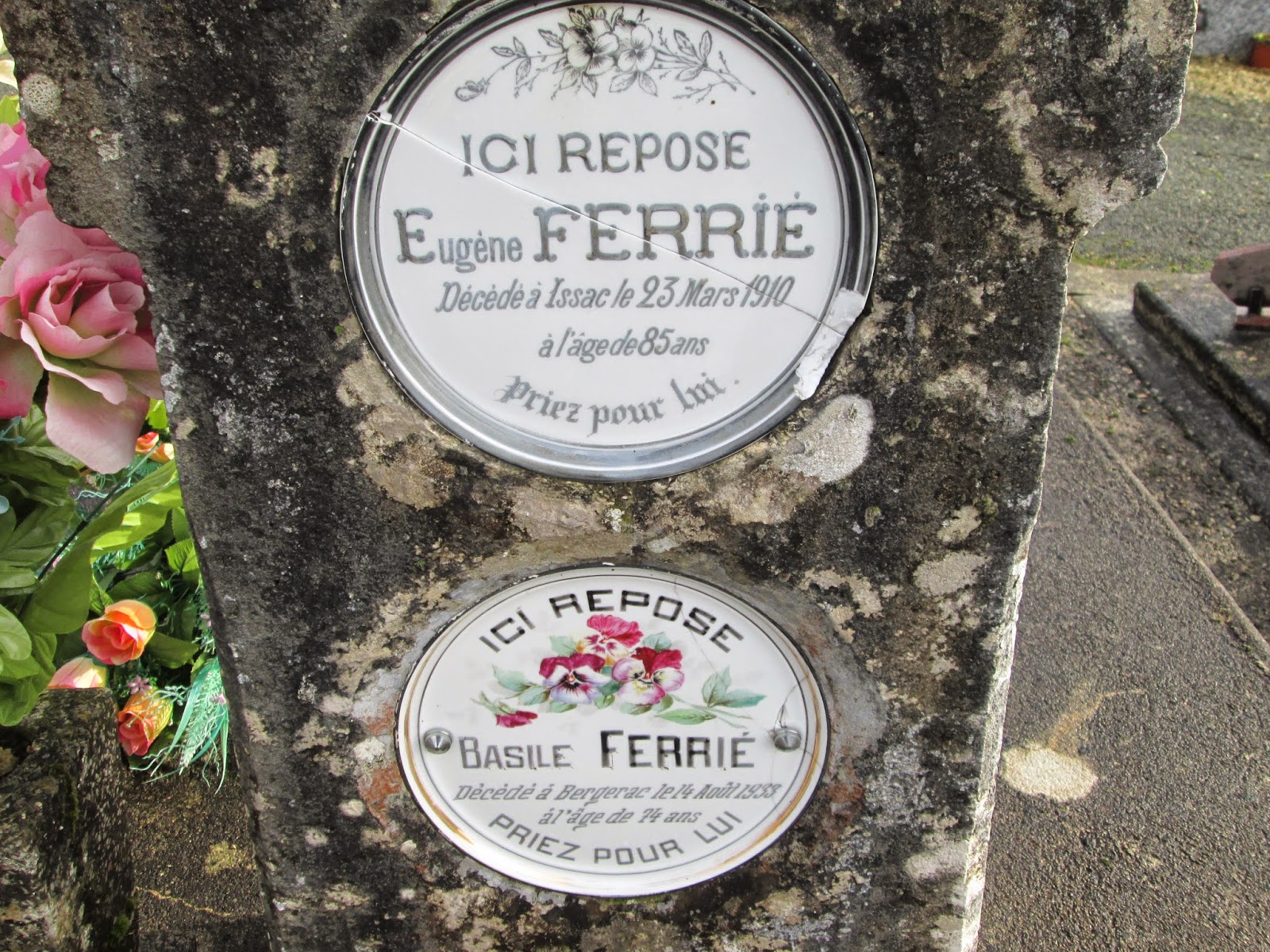 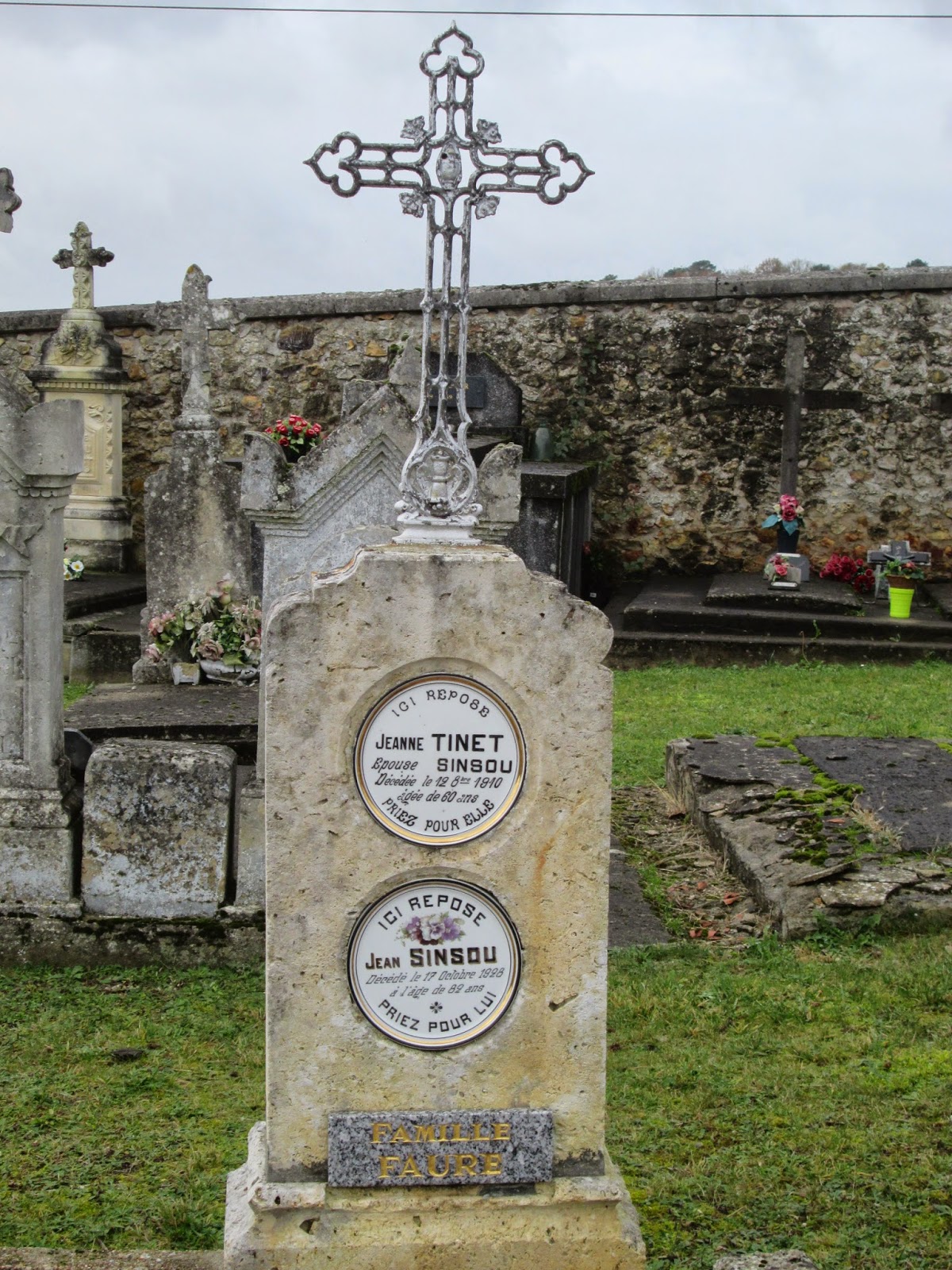 Sometimes plaques were put on that obviously represented an interest or love or occupation of the deceased such as this wild boar one for a hunter, I presume, or one for a soldier: 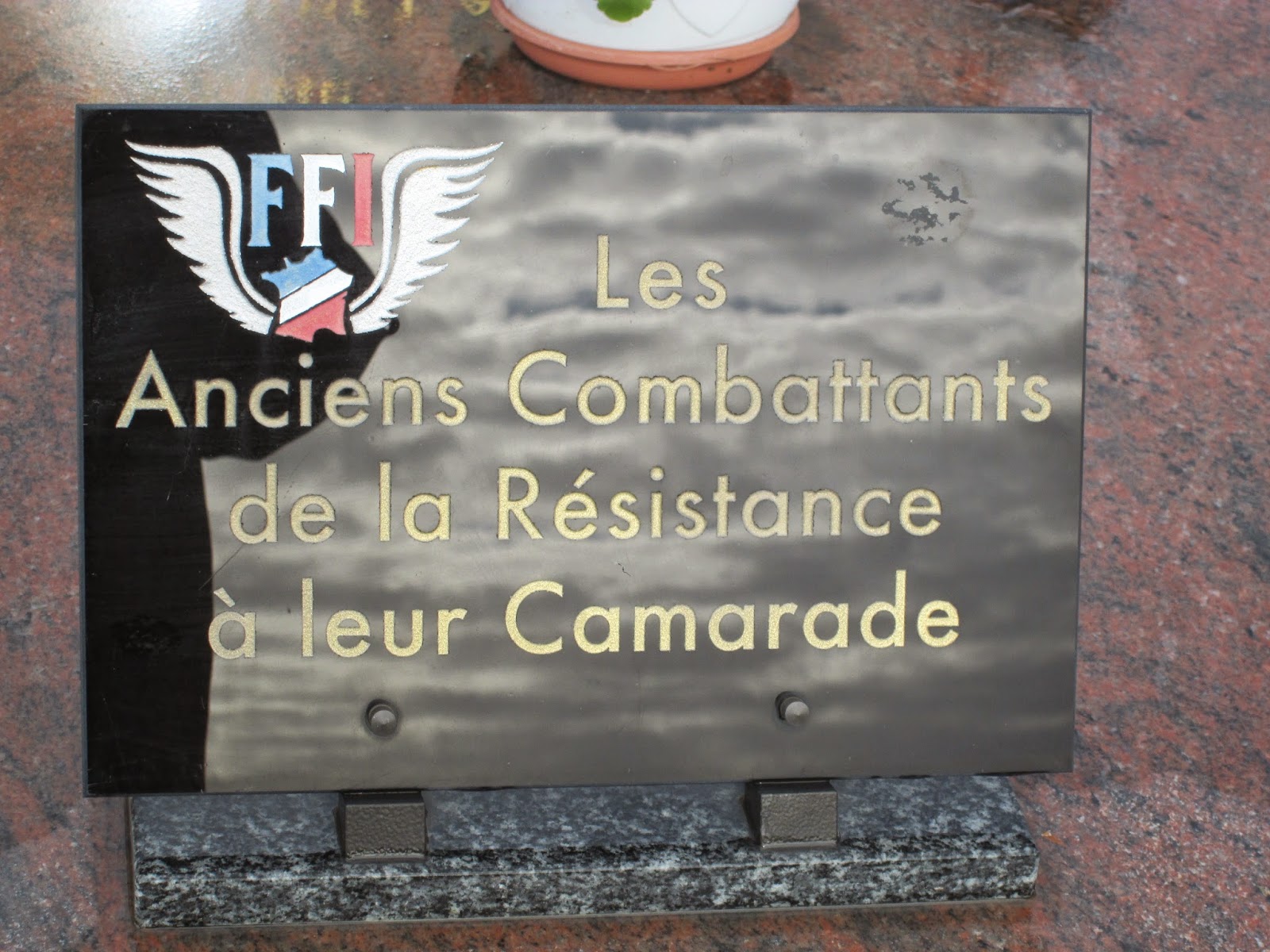 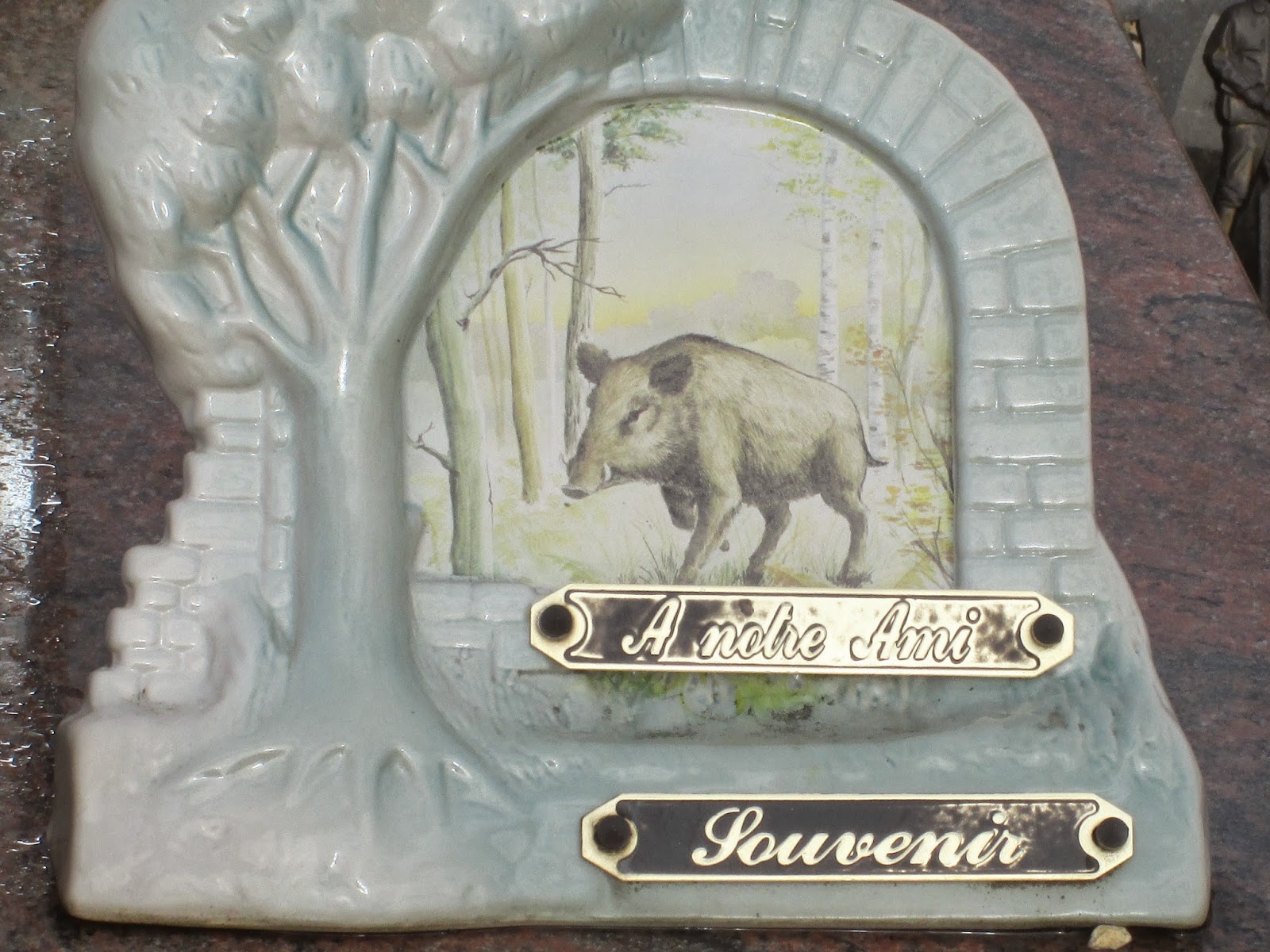 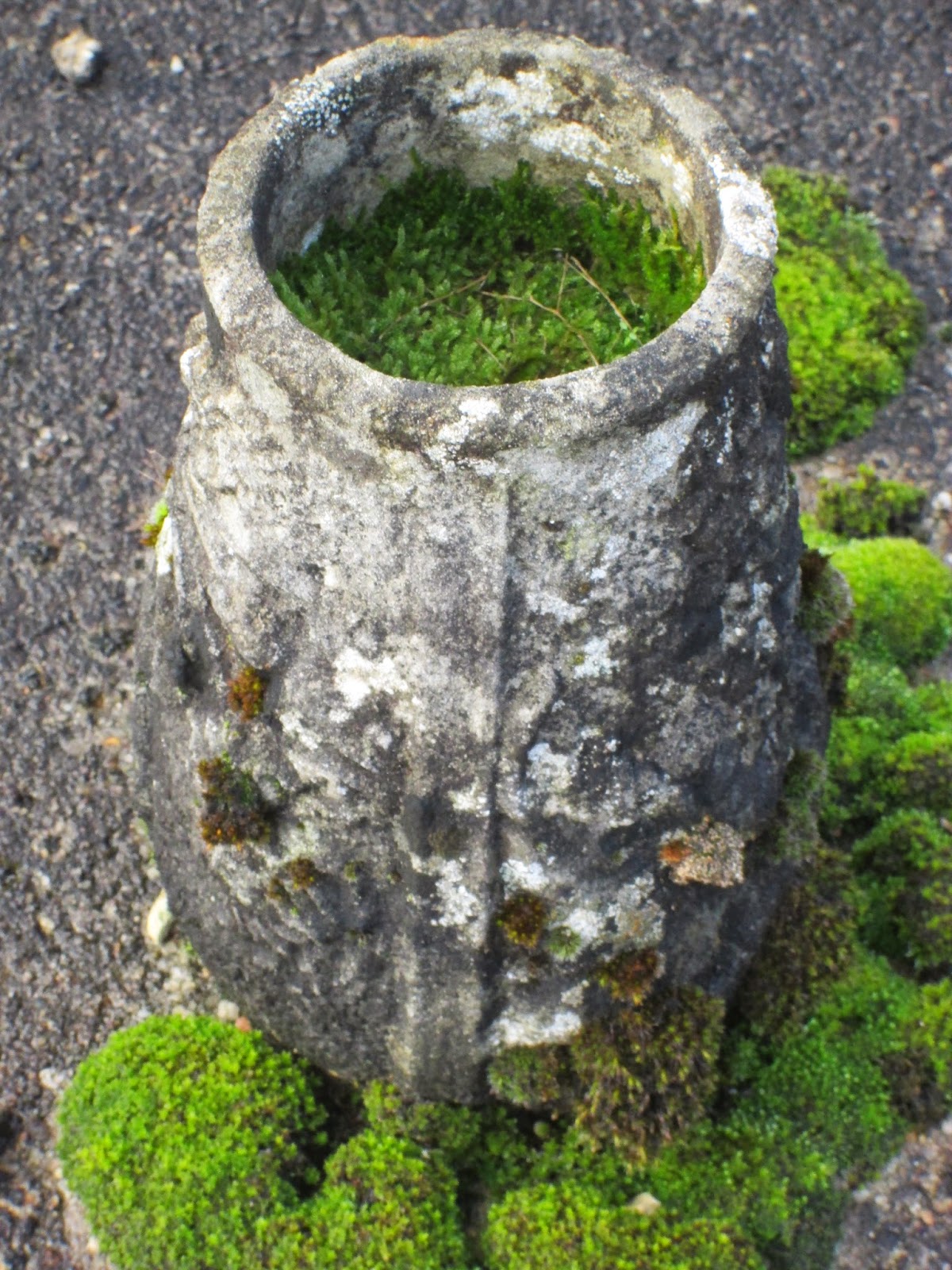 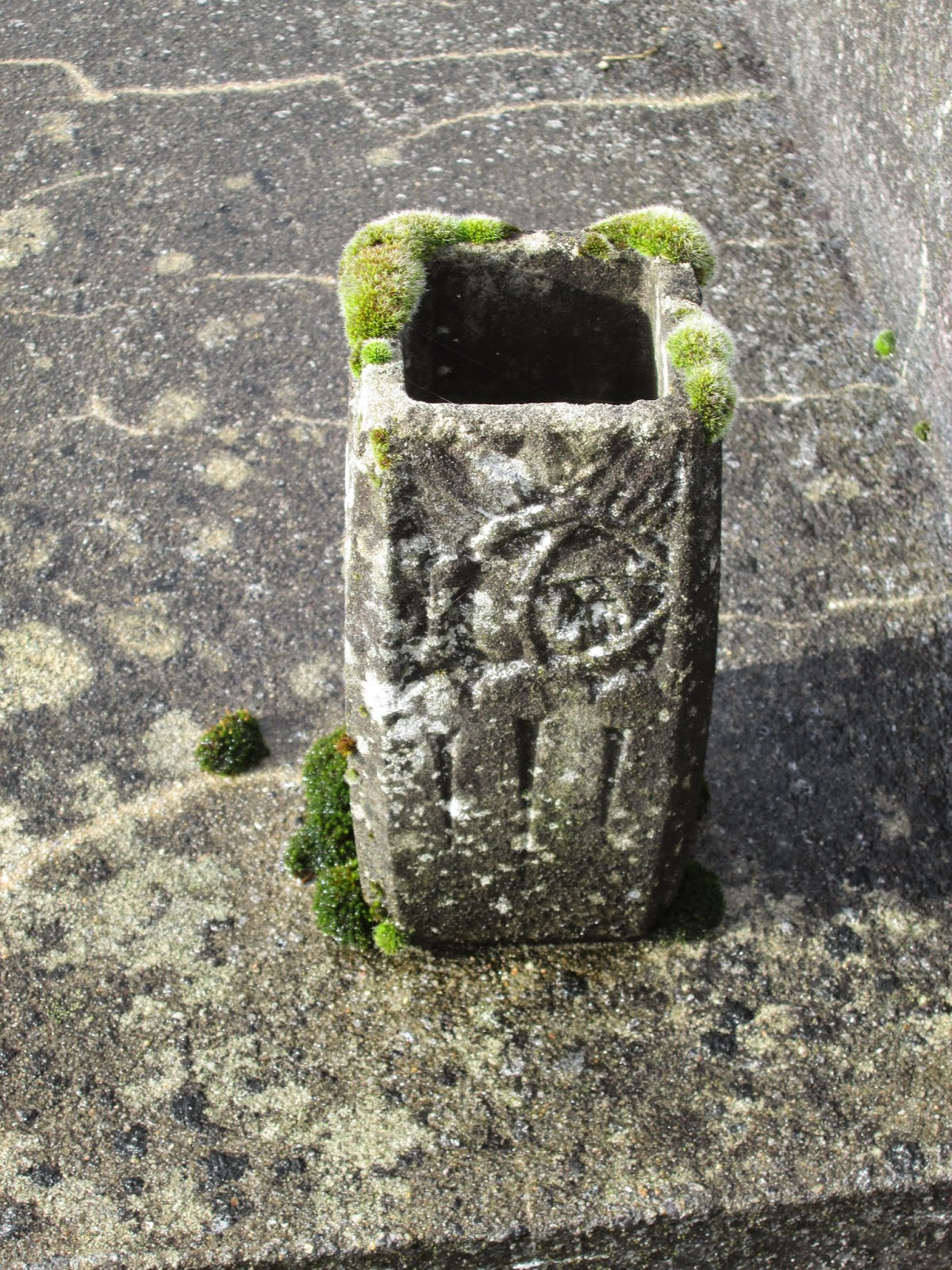 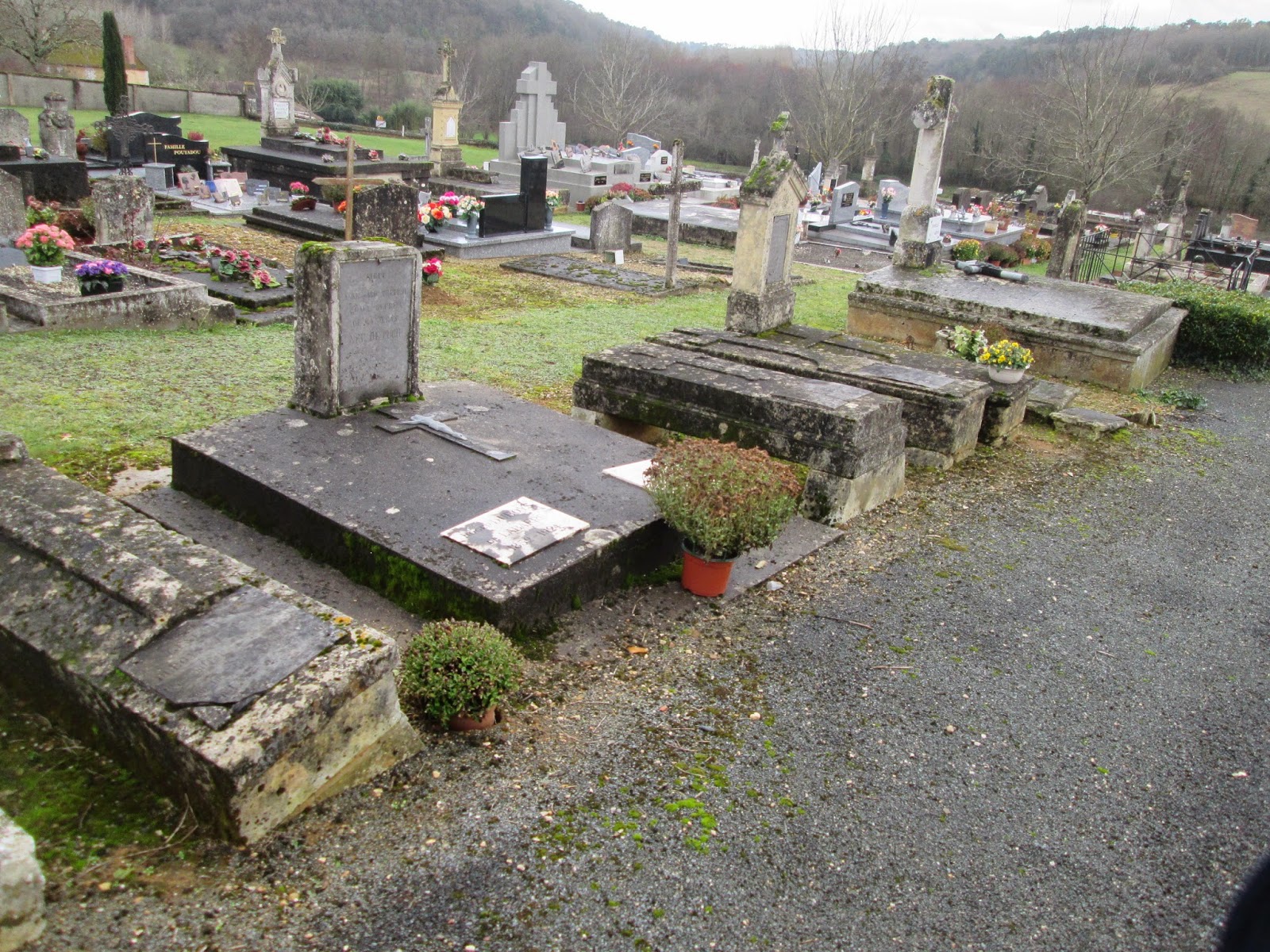 The trip to Issac Cemetery was intriguing.  It is my guess that the graveyard only dates back to the 1800's, possibly 1700's and that there must be another earlier graveyard somewhere else near the village.  Even so, Jess and I saw some really interesting stuff and enjoyed our graveyard exploration and we look forward to learning more about the families of the area and their history!!!!!
Posted by .. at 4:14 PM